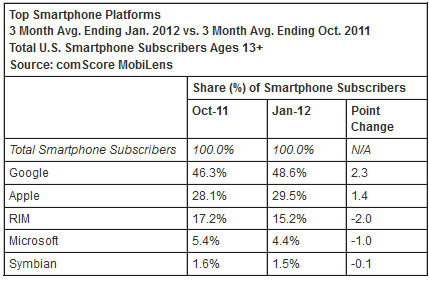 Market research firm comScore on Tuesday released the results of a three-month study on the U.S. mobile phone industry. Android and iOS continued to grow between November and January, gaining 2.3% and 1.4% respectively. Google’s mobile platform topped the charts with a total market share of 48.6%, while Apple managed to capture a 29.5% share. Research in Motion and Microsoft, however, continued to tumble, falling 2% and 1% in the same period. After surveying more than 30,000 U.S. mobile subscribers, comScore found Samsung to be the top handset manufacturer with a 25.4% market share. The company was followed by LG with a 19.7% share, Motorola with 13.2%, Apple with 12.8% and RIM with a 6.6% share. The research firm also found that the number of U.S. smartphone subscribers increased 13% since October and surpassed 100 million users for a total of 101.3 million. ComScore’s press release follows below. 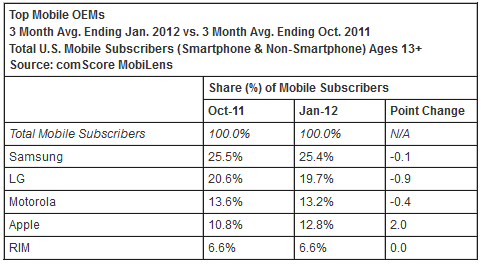